A Pebble in the Pond 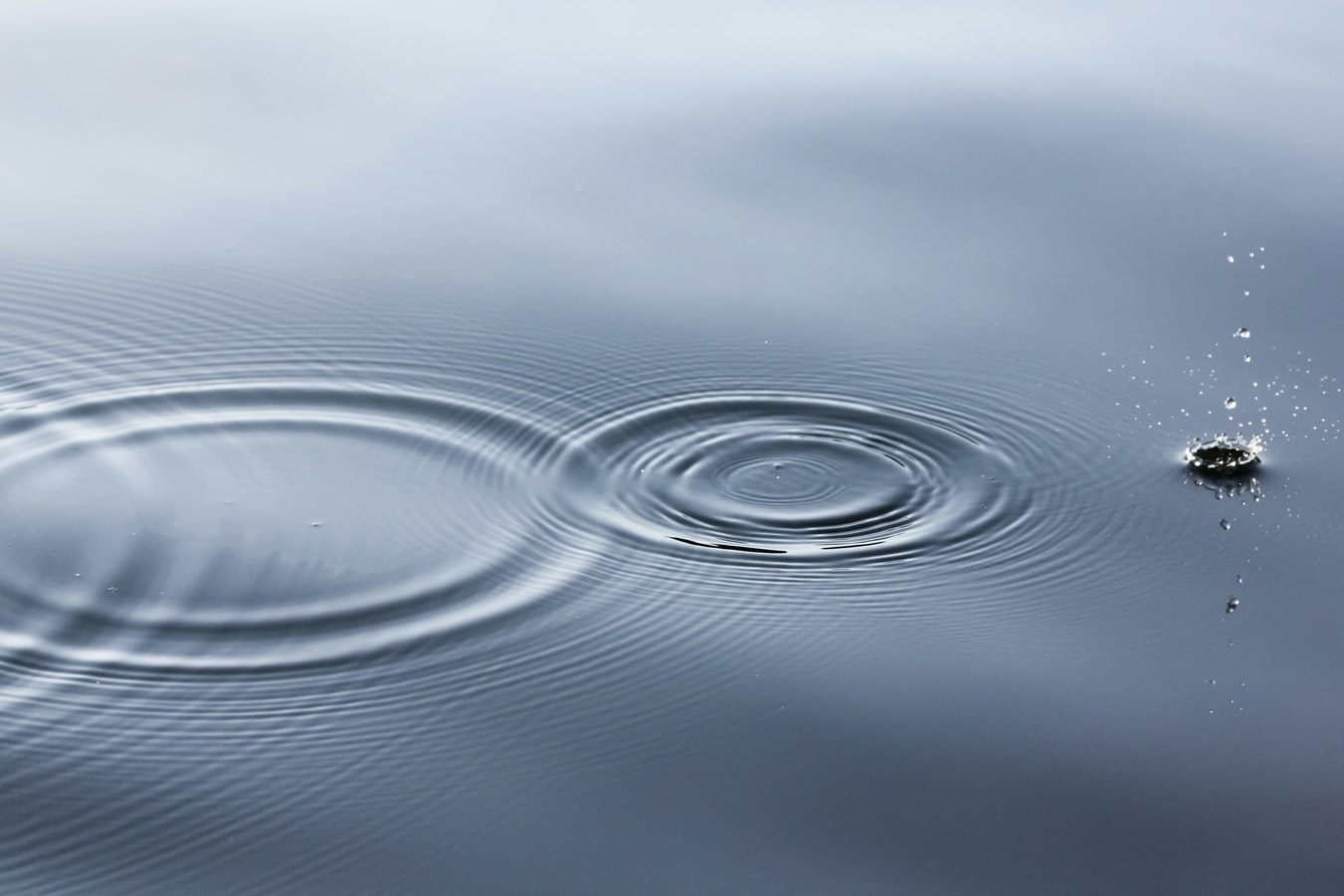 An Extremely Encouraging Perspective on Your Future Fruitfulness

Toss a pebble into the pond. Tiny waves, forming concentric circles, roll outward from the point of impact until they become too small to see.

Figuratively speaking, the ripple effect refers to the gradual, long-range consequences of a spoken word, deed, or event. A chain of causation begins with the original agent, setting in motion a process of influence. One individual inspires another, resulting in that person’s impact on a third party who in turn affects someone else. The upshot of it all is that our lives have more impact than we think.

That is especially true in various realms of our service for Christ. If we’re a Sunday School teacher or small group leader, if we lead a neighbor to faith in Christ, if we consistently intercede for our pastor or give to a missionary’s support, what we do produces waves of grace that keep expanding all the way to eternity!

Your potential isn’t hemmed in by the extent of your own abilities. Your potential for Christ includes the future kingdom contributions of individuals you influence, plus those of persons they, in turn, inspire or serve, and so on, ad infinitum. When it comes to intellect, opportunity, or giftedness, others may run proverbial circles around you. Yet something you said or did was pivotal to their spiritual formation or ministry, becoming the pebble that fell into the water.

For a choice example, consider Barnabas. I’ll cite two persons for whom he intervened, and whose ministries, on the surface at least, outstripped his.

A zealous Pharisee, Saul was a ringleader in the persecution of the church in Jerusalem that began with the stoning of Stephen. He breathed “threats and murder against the disciples of the Lord” (Acts 9:1). After Christ miraculously appeared to Saul on the road to Damascus, his life did an about-face. With a fervent spirit, he began proclaiming Jesus as the Son of God in the synagogues of Damascus.

Returning to Jerusalem, Saul encountered an obstacle to the pursuit of his new calling. Believers there “were afraid of him, not believing that he was a disciple” (Acts 9:26). They couldn’t get past his previous staunch opposition to the gospel, wondering if his conversion story was a ploy to destroy the church from within.

Next comes a hinge verse on which the progress of the gospel turned: “But Barnabas took hold of him and brought him to the apostles and described to them how Saul had seen the Lord on the road…and how at Damascus he had spoken out boldly in the name of Jesus” (Acts 9:27, emphasis mine). The leaders heeded Barnabas’ intervention, for Saul “was moving about freely in Jerusalem, speaking out boldly in the name of the Lord” (vs. 28). With a timely word, Barnabas defended Paul’s testimony and sponsored him among the leaders in Jerusalem.

Those who fled Jerusalem after the stoning of Stephen shared the gospel wherever they went, including the Gentile-saturated city of Antioch. When news of conversions in Antioch reached leaders in Jerusalem, they sent Barnabas to guide the infant believers.

Barnabas modeled a Spirit-filled life among them, encouraged them to remain resolute in their faith, and taught them. But he knew the workload was too much for one man. That’s when he took a recruiting trip to Tarsus, where Saul (also known as Paul) had been exiled after Jewish antagonists threatened his life in Jerusalem. He remembered hearing Paul’s effectiveness and zeal for proclaiming Christ. Following the Holy Spirit’s leading, he yanked Paul out of seclusion and brought him to Antioch. Together, they taught the burgeoning number of new believers and led others to Christ.

The achievements eventually listed in Paul’s obituary far eclipsed the copy in Barnabas’: planter of multiple churches, author of a sizable chunk of the Bible, and outside of Jesus himself, the most prominent figure in the New Testament.

But without Barnabas, would any of us even know Paul’s name?

Plunk. A small stone breaks the surface of the pond.

Do you know anyone being judged by his or her past, rather than by his or her current commitment to Christ? Someone whose gifts are dormant, who needs a timely word or venue for ministry that you can provide? Are you anywhere near a pond?

During their initial church-planting venture (Acts 13-14), Barnabas’ young cousin, Mark, assisted them. Early in the campaign, Mark deserted them (Acts 13:13). Probably still a teenager, he wasn’t ready for the rigors of gospel ministry in hostile environments. Despite life-threatening opposition, Paul and Barnabas kept preaching and leading people to Christ throughout Syria and Cilicia. Later, they returned to their sending church in Antioch to report on God’s grace among the Gentiles.

(In Acts 13:2, “Barnabas and Saul” were set apart for the first missionary journey. We see Paul’s strong leadership emerge as the chapter progresses. Luke began referring to the duo as “Paul and Barnabas.”)

When Paul broached the idea of a follow-up visit to the churches they had established, Barnabas wanted Mark to accompany them again. Paul adamantly resisted, citing Mark’s previous abandonment. A contentious argument ensued, causing a rift between the leaders. Paul replaced Barnabas with Silas. Barnabas draped his arm around Mark’s shoulder and left for a more obscure ministry in Cyprus.

How like God…to redeem even the quarrels of men! Now the early church had two teams instead of one.

What was the long-term effect of Barnabas’ encouragement of Mark? After years of silence, Mark showed up in Rome as Peter’s assistant (1 Peter 5:13). Paul’s own attitude toward Mark shifted dramatically. Twice he cited Mark as his fellow-worker (Col. 4:10, Philemon 24). While incarcerated in Rome with only months to live, Paul urged Timothy, “Pick up Mark and bring him with you, for he is useful to me for service ” (2 Tim. 4:11). Mark’s primary legacy is the Gospel that bears his name, a fast-paced narrative that Bible translators often use first to introduce unreached people to Christ.

Despite Mark’s desertion, Barnabas saw a mother lode of potential in Mark and chose to excavate it. God still woos people to himself through the writing of a failure, to whom Barnabas gave a fresh chance to serve.

Splash. Ever-expanding undulations in the water move farther and farther from the point of impact.

How would you feel if you had heard today’s equivalent of the Apostle Paul say that he didn’t want you on his ministry team?  Do you see the potential for ministry in someone who failed in the past, who needs someone to come alongside and instill hope for a fruitful future?

Do you ever feel a tinge of envy toward someone whose giftedness and platform for ministry are much larger than yours? Do you ever wish you had a gift or ability that God chose not to give you? Have you concluded that your weaknesses outnumber your strengths, and you’ve resigned yourself to a life of limited fruitfulness? If so, get your eyes off yourself and look for someone in need. That person may be the catalyst to your more fruitful life.

Never underestimate what God can do through you, because of what He did through Barnabas.

Plop. Dive into the pond and trust the Lord for ripples that extend farther than your eyes can see.

My book, Serve Strong: Biblical Encouragement to Sustain God’s Servants, has separate chapters on the lives of Barnabas and John Mark. There you will find 24 relatively short chapters offering insights to instill resiliency in Christian living and ministry. The late author, missionary statesman and Christian college President, Robertson McQuilkin, said this about Serve Strong: “I can’t remember reading a more powerful book of encouragement for pastors, missionaries and lay Bible teachers. Well-written, practical, fresh, penetrating and a fun read! I heartily recommend Serve Strong for you, or as a gift for any professional or lay leader in ministry.”

A note to my subscribers: I informed you that my next blog would be a personal, difficult post framed around journal entries revealing depression symptoms over several decades. That project is taking longer than expected, so I came up with another topic that is dear to my heart which didn’t take nearly as long to prepare.

Here is the Amazon link to my book: