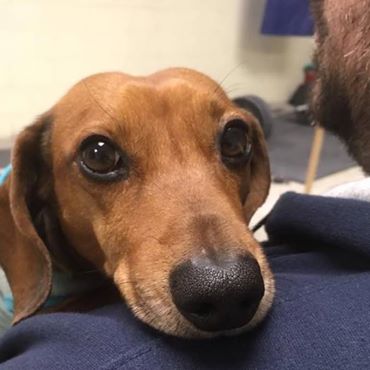 To love is a risky venture.

Cherish a child, a parent, a sibling, or best friend and he or she may die, sending shrapnel through your heart, leaving it in tatters. Your fiancé may abruptly change his mind, leaving you at the altar with shattered dreams. Your spouse may break her marriage vows, rattling your soul with an all-consuming combination of hurt and anger. Your grown child may demonstrate inexplicable hostility toward you.

Or cancer yanks your beloved dog out of your arms.

That’s what happened recently to my son, Stephen, and to my wife and me. Stephen’s Wendall, a dachshund who he rescued from a shelter almost seven years ago, succumbed to lymphoma on April 13.

After the diagnosis, thanks to a steroid, Wendall enjoyed almost normal strength for a couple of months, taking walks with us and eating heartily. The hard part was knowing he was terminal, no matter how energetic he seemed at any given point in time. We didn’t have his birth records, but the vet estimated he was at least 11. The hairs on his face and chin had started to turn white.

Then in a matter of days, an already swollen lymph node in his neck tripled in size. We noticed swelling around his eyes and a leakage of fluid from them. When he returned to our back door after doing his business in the yard, his trek up the two steps became increasingly difficult. On his final day, his breathed laboriously and stopped eating.

Taking Wendall to the vet to put him to sleep was the longest four miles I’ve ever traveled. Unless you’ve loved a dog, you cannot comprehend the pain.

I’ve known of Christians who snickered and considered it absurd to hear a prayer request for a dog, who silently mocked a person’s tears over his or her sick pet. I assure you, those persons have never loved a dog nor been loved by one. I apologize to no one for my intercession for Wendall, especially for him not to endure a lingering discomfort. Nor do I label all the tears I’ve shed for him mere maudlin sentimentality. And my pain is doubled, because I grieve for my son, whose love for Wendall is deepest, not just for Wendall or for myself.

I have reservations about anyone who can’t bring himself to love an animal.

I can’t speak for my son or for Dolly, but I don’t think Wendall loved me because I first showed him affection. No, I loved him because he first loved me. Those first few weeks we had him I couldn’t conceive of loving him anywhere near as much as I loved the dog we already had. But that changed. I eventually gave my heart to Wendall because he so unreservedly, enthusiastically and unashamedly gave me his heart from day one. Along with Farley, the almost 13-year-old dachshund we’ve had since he was two months old, Wendall became an integral member of our family, not just a pet who was nice to have around.

What did I love about Wendall? What did he teach me?

Defender of His Daddy

Wendall exhibited a gentle, mild-mannered temperament. Unlike his “alpha male” adopted brother, Farley, he didn’t growl at strangers, “show his teeth” when you tried to pet him while he chewed on a leather bone, or charge neighborhood fences when another dog dared to bark at us when we walked by. No, Wendall kept walking merrily along while Farley went nose to nose with the other dogs through chain-link fences.

Calm, easy going, friendly.  Except when he thought you posed a threat to his daddy!

Stephen is a massive guy, a weightlifter and coach of lifters. He’s among the strongest men in the state of South Carolina. It’s rather comical to think that I, a 70-year-old with a slew of health problems, pose a threat to Wendall’s dad. Yet since I’m also a large man, anytime I walked by the recliner while Wendall sat on Stephen’s lap, he assumed his daddy needed his protection. The typically docile Wendall suddenly morphed into a pugnacious little fellow who barked combatively at me. Then he’d leap onto the floor and chase me down the hallway, nipping at my heels, growling, tenaciously yanking on my pajama bottom or pants cuff (without ever biting me).

This never happened unless he was lounging on Stephen’s lap. Wendall loved each of us, but his primary loyalty was to his dad. You didn’t mess with his daddy. I have no doubt whatsoever that Wendall would have charged a Rottweiler if he thought it threatened Stephen.

Whoever we love, we protect and defend.

Penchant for Play and Joyful Jaunts

Wendall trots to the toy basket in our den. He plucks out a “rubber bone” or stuffed fox, jerks his head upward with all his might, heaving it a foot into the air. He grips it again, shakes his head vigorously, then galavants down the hallway with it.

While I sit on the couch, Wendall drops a 10-inch strand of rope at my feet. His tail wags like car windshield wipers on high and his eyes bore into me with a challenge: “Bet you can’t get the rope before I do!” I seldom won. The proud victor, he’d prance around the room with the rope, repeatedly giving me fresh chances to beat him, to no avail.

In retrospect, I see a direct correlation between Wendall’s exuberant play and his happiness at being a member of our family. When one of us entered the house after several hours away, or when he arrived home on the days Stephen took Wendall to work, after greeting us, his awareness of seeing us all together and of being back in his home environment propelled his frivolity to a new level. He sprinted back and forth between the den and the end of the hallway.

Pausing only long enough to spin his body in a complete circle before shifting to high gear once again. If you tried to stop or to catch him, he’d spin in a circle at a dizzying speed to distract you , then dart around you.

A puppy often exhibits some form of boisterous behavior. But until the cancer began siphoning off Wendall’s energy the last few weeks, his regular routine included the games and sprints, long after he edged into the “senior citizen” stage of life.

It’s as if he couldn’t contain his happiness. Like water that boils over the rim of a full pot if we don’t turn off the burner in time, Wendall couldn’t keep a lid on his joy, necessarily demonstrating his elation through bubbly physical expressions. His euphoria had to go somewhere.

Thanks, Wendall, for showing me that play doesn’t need to end when we get older. For reminding me of the blessed privilege of having a secure place called “home” where I’m surrounded  by folks who love me. For demonstrating that it’s an outright sin to take for granted the place and the people God has given me.

When we know we are loved, it should be hard not to be happy.

The Pleasure of Presence

When Stephen didn’t take Wendall with him to the gym, Wendall knew when it was about time for his daddy to return home. You’d think he could read the clock on the wall. He’d perch on the edge of the couch in the den, hind legs on the seat cushion and front legs on the arm, gazing at the back door entrance from the garage where he expected his daddy to enter at any moment. I’ve seen him wait an hour without leaving his post, because his dad did not finish coaching at the same precise time every evening.

Just days before we put him down, a front window near our driveway was up due to the pleasant temperature. He heard his dad’s car pull in, then heard him speak to a friend who had pulled in behind him. Wendall marched to the window, hoisted himself on his hind legs, leaned against the wall, straining to reach the window sill, craving a glimpse of his dad. Alas, even with a long wiener-dog body, he was too small to see out the window.

When you love someone, you celebrate his arrival. You don’t take for granted seeing him or her on any given day. (Or ever again.)

When Wendall thought his dad was sleeping too late, he strolled down the hall and plopped just outside Stephen’s bedroom door. When Stephen entered the hallway bathroom, Wendall nestled on the carpet just outside the door. When Stephen sat in the recliner using his laptop or watching TV, Wendall usually clamored to get into the chair, wanting the comfort of his dad’s lap.

Wendall wasn’t satisfied with mere words, no matter how winsome and soothing they were. No, he insisted on physical touch. (Like when Wendall gave me one lick on the tip of my nose every time I lifted him high to greet him.)

When you love someone, you want to be with that person. Companionship is an integral part of marriage, parenting, grandparenting, and friendship. Despite all the advantages of social media and “face time” phone chats, nothing beats physical touch or presence.

I heard a medical expert on TV suggest that we keep practicing social distance the rest of our lives, long after the threat of the COVID-19 infection is over. Oh Lord, spare me from a world in which authorities permanently ban handshakes, pats on the back and hugs.

My next blog will convey up-to-date research on the value of pets, dogs in particular, for optimum mental and physical health.