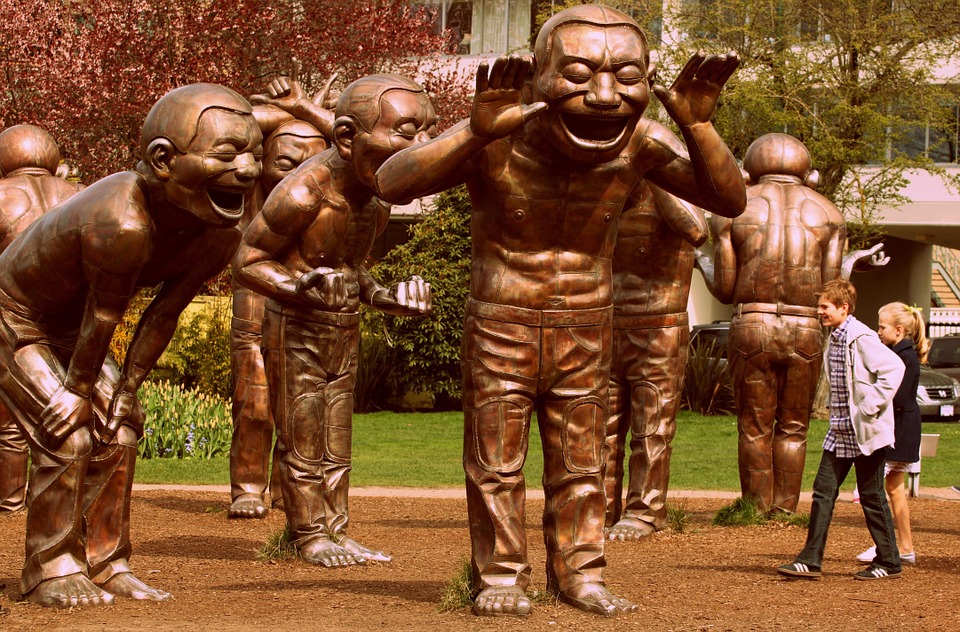 After a worship service, a young child announced to his parents, “I’ve decided to become a minister when I grow up!”

Cautiously encouraged by her son’s spiritual openness, the mom asked, “That’s okay with us, but what made you decide that?”

The little boy said, “Well, I have to go to church every Sunday anyway, and I figure it will be a whole lot more fun if I get to stand up and yell instead of having to sit still and listen!”

God’s calling to vocational ministry comes in a variety of forms….

Twice in the  past couple of years, I’ve taken a light approach to a blog and offered humor, even citing research on how laughter can assuage despondency. With all the fretting about the COVID-19 pandemic and the gloomy spirit within many people due to social isolation, I’m offering additional stories that I hope will cause you to crack a smile. I’m not repeating anything posted in those previous blogs, but I am narrowing the focus in this one to anecdotes or quotes about kids as well as marriage, with an emphasis on the occasional blunt remark.

At the end of my previous post about our dachshund, Wendall, I promised a research-based article on the effect of pets on mental and physical health. I am in the process of researching that topic,  but I need a few more days to finish it.  Meanwhile, enjoy.

In this particular congregation, they collected the offering near the end of the worship service, after the sermon. One Sunday the pastor was especially long winded. The sermon dragged on and on. A little girl kept squirming and knocking her feet against the pew in front of her. Finally, she leaned over to her mom and whispered in exasperation, “Mommy, if we go ahead and give him the money now, will he let us go?”

Bobby’s mother asked him what he had learned in Sunday School that morning. The 9-year-old said, “God sent Moses behind enemy lines on a rescue mission to lead the Israelites out of Egypt. When he got to the Red Sea, he had his engineers build a pontoon bridge and all the people walked safely to the other side. Then he called headquarters on his cell phone and asked for an air strike. They sent bombers to blow up the bridge before the Egyptian army could get across it. All the Israelites were saved!”

Secretly hoping that his teacher didn’t embellish the Bible story in that manner, Bobby’s mom queried, “Now Bobby, is that really what your teacher taught you?”

“Well, no,” Bobby admitted. “But if I told it the way the teacher did, you’d never believe it!”

A young lad wrote what he had learned from a  lesson on the 10 commandments: “Moses went up on Mount Cyanide to get the Ten Amendments. The first commandment was when Eve told Adam to go ahead and eat the apple. The fifth commandment is to humor thy father and thy mother. The tenth commandment is thou shalt not take the covers off thy neighbor’s wife.”

While sitting on her grandpa’s lap as he read her a book, the little girl took her eyes off the book and stared at her grandpa’s wrinkled face. She rubbed her hand over the rough, creased skin of his cheek, then interrupted the reading to ask, “Grandpa, did God make you?”

“Why yes, sweetheart. God made me a long time ago.”

“Did God make me, too?” she inquired.

“Indeed He did, honey. God made you just a little while ago.”

She concluded, “God is getting a lot better at it, isn’t He!”

A Sunday School teacher milled around the room as her young pupils did their artwork. As she approached one girl, the teacher asked, “What are you drawing?”

After a pause, the teacher said to the girl, “But no one really knows what God looks like.”

The confident girl replied, “Well, they will in a minute!”

After a lesson about how to get into heaven, the teacher asked a series of review questions.

“If I sold my house and my car and gave all the money to the church, would that get me into heaven?”

“No!” exclaimed the kids in unison.

“If I cleaned the church sanctuary and classrooms every week and mowed the grass outside the church building, would that get me into heaven?”

Again the pupils yelled, “No!”

Bursting with pride that they had apparently absorbed the lesson, she asked her final and most important question: “Then how can I get into heaven?”

Children, Their Families, and School

After her very first day of kindergarten, the mom asked her daughter, “Did you learn a lot at school today?”

“Must not have,” muttered the forlorn-looking kid. “I have to go back tomorrow.”

An older elementary student, in a test about government, wrote, “Someone who runs for an office he already holds is called an incompetent.” (Maybe the kid has more insight than we think….)

While watching her mom wash dishes, the little girl noticed that her mom’s brown hair was getting a few strands of white. Curious, she asked, “Why are some of your hairs getting white, mom?”

“Well, every time you do something wrong, it bothers me and makes me cry, causing another one of my hairs to turn white.”

The little girl thought long and hard about what her mom said, then declared, “Momma, now I know why all of grandma’s hairs are white!”

Attending her first wedding, the little girl asked her mom why the bride was dressed in all white. “Because white is the color of happiness,” the mom said, “and today is the happiest day of her life!”

The girl thought about this for a moment and asked another question. “So why is the groom wearing all black?”

A mom and her little boy sat on the beach watching people stroll by. A well-proportioned young lady came by, wearing a skimpy bathing suit.  “Look mom!” the boy said as he pointed at the other woman. “That lady has on the same swimsuit as you, but hers has a very different shape!”

The school teacher’s children had all been photographed. She was trying to persuade her kids to coax their parents into buying a class picture. “Just think how nice it will be when you are all grown up and look at the picture. You will say, “There’s Brenda, the lawyer. That’s Frank, the doctor. And that is Hope, the school principal.”

A voice at the back of the room suddenly rang out, “And there’s our teacher. She’s dead.”

Miss Stallings saw one of her boys making faces at other kids on the playground. She went over to gently reprove the boy. “Ronnie, when I was a child, I was told that if I made an ugly face, it would freeze and my face would stay like that forever.”  Ronnie looked up and replied, “Well, Miss Stallings, you can’t say you weren’t warned.”

A man and his wife were sitting at a table during his 20th high school reunion. She had not attended his high school. They kept staring at a woman, all alone, who staggered around, obviously tipsy from too much alcohol.

“Do you know her?” the wife asked her husband.

“Yes,” he sighed. “Actually, she was my girlfriend. We went steady in high school until I broke up with her right before graduation. I hear she hasn’t been sober since. Guess she never did get over me.”

The wife countered, “Wow, who’d think that a person could go on celebrating that long?!”

And that’s when the fight started….

A wife had been hinting for days about what she wanted for her birthday. Finally she became more direct in her clues. She said to her husband, “I want something shiny that goes from 0 to 150 in about three seconds.”  He bought her a bathroom scale.  And that’s when the fight started….

One year, a man chose a very practical gift for his mother-in-law’s Christmas present: a cemetery plot. The next year, he didn’t buy her anything. When she asked her son-in-law why, he replied, “Well, you still haven’t used what I bought you last Christmas!” And that’s when the fight started….

The middle-age wife was standing in front of the mirror in the bedroom, clad only in her underwear. She wasn’t happy with what she saw. She turned to her husband and said, “I feel horrible. I look old, wrinkled, fat, and ugly. I really need you to pay me a compliment right now.”

He obliged. “You eyesight is near perfect!” And that’s when the fight started….

While a man was reading the newspaper at breakfast he said to his wife, “Look at this. Another beautiful actress is going to marry a pro baseball player who’s a total dope. I’ll never understand why the biggest jerks get the hottest wives.”

“Thank you,” said his wife.  And that’s when the fight started….

*A wife got so mad at her husband she packed his bags and ordered him out of the house. As he walked to the door, she yelled, “I hope you die a long, slow, painful death!”  He turned around, puzzled, and said, “So, you want me to stay?”

*Overheard at a party: “My wife and I agreed to never go to bed angry with each other. So far neither of us has slept for two weeks.”

*A man is talking to a friend. “I haven’t spoken to my wife in over a year.”  “Why not?” wondered the friend. The man says, “I was taught not to interrupt.”

*The actor Mickey Rooney had numerous wives. His counsel to would-be brides and grooms? “Always get married in the morning. That way, if it doesn’t work out, you haven’t wasted the whole day.”

They had been married for 60 years. They had shared everything, had never been unfaithful to each other, and had talked about everything. And with only one exception, they kept no secrets from each other. The wife kept a shoebox in the top of her closet, and she insisted that  her husband never open it or ask about its contents.

Over the decades, the husband rarely thought about the box. Then after their 60th anniversary, his wife became very sick and the diagnosis was terminal. She didn’t have many days left to live. While trying to sort out their affairs and get things in order for her departure, he took down the shoebox and carried it to his wife’s bedside. She agreed that it was time for him to know what was in the box.  When he opened it, he found two crocheted doilies (decorative mats made from fabric) and a stack of money totaling $25,000. He asked her to explain.

“Before our wedding,” she recalled, “my grandmother told me that the secret of a happy marriage was to never argue. She told me that if I ever got mad at you, I should just keep quiet and crochet a doily.”

The old man was moved to tears. Only two precious doilies sat in the box. He almost burst with happiness because she had been angry with him only twice in all those years. Then he inquired, “Honey, that explains the doilies, but what about all this money? Where did the $25,000 come from?”

“Oh, that’s the money I made from selling the doilies.”

I adapted some of these stories from Richard Lederer’s book, The Revenge of Anguished English (St. Martin’s Press, 2005). Others I accumulated over the years from the internet and other sources, without awareness of original authorship. Think of friends or family members who need a light moment and send this post to them.