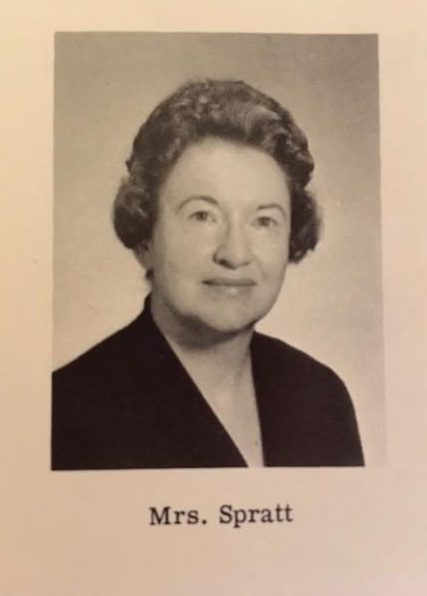 That’s all it took for her to change my life. It was what she did and said to start her first-period English class, early in the Fall of my senior year of high school.

Before I explain, I need to set the stage for that life-altering incident, which occurred at Chase High School, in southwestern North Carolina, in 1966.

To say that I had low self-esteem as an adolescent is like saying the Pacific Ocean is deep, or the North Pole is cold. Bereft of social confidence, especially around girls, I never dated in high school. Oh, I wanted to. That’s why I cried myself to sleep scores of nights during those years, wishing I could be “normal”–whatever that was.

I’d sit in class and write poems about girls on whom I had a crush. Sometimes, I’d muster up the courage to sign a poem and stuff it in the girl’s locker (before locks were commonplace). Yet when it came to conversing with a girl, or asking her out, my confidence collapsed. I told myself, “Why bother to ask? She’ll just turn you down, then you’ll feel even worse!”

How shy was I? When I spotted a girl I liked coming toward me in the hallway at Chase, I’d duck into the bathroom to avoid meeting her. Sometimes it was a girl in whose locker I had left a poem.

During high school, I daydreamed a lot, studied little, and clawed my way to a “C” average for those four years. (No junior high in our county at the time.) Entering my senior year, going to college was not on my radar. Who needs college, when you plan to become a pro baseball player? (I earned all-conference honors as a pitcher, but I wasn’t good enough to fulfill a boyhood dream of playing in the major leagues.) My  S. A. T. score was too low to be accepted into many colleges, another reason I didn’t plan on more schooling.

Now back to that eventful day, early in my senior year.

My latest crush that autumn was a starter on the girl’s basketball team. The day before, while my English teacher lectured eloquently about the value of great literature, I scribbled a poem about the girl. I put her name at the top, described her good looks, mentioned positive qualities, and why I wanted to get to know her better. It was not one of my mushier poems. The rhyming scheme was creative and appealing. Without the name, her identity would be difficult to determine. She was not in that particular English class.

It turns out that I inadvertently left the poem on my desk when the bell rang.

The next morning, my feisty, passionate, red-headed teacher, Mrs. Frances Spratt, began her class in an unusual manner:  “Class, I want to read you something.” She was beaming proudly.

Mrs. Spratt knew that I was an underachiever who didn’t plan to go to college. She knew I lacked self-confidence and ambition for anything outside of baseball. And she began reading aloud my poem for all twenty-plus peers to hear!

Though she didn’t say who wrote it, and she did not mention the girl’s name, I was rattled. My heart lurched, and my hands felt clammy. I wanted to slink down and hide under my desk, an impossibility since I stood 6′ 4″ tall and weighed 210 pounds.

(Oh, I’d pay big bucks to be that weight again. But I digress.)

She read the poem with gusto, as if she had practiced reading it aloud so she could put vocal emphasis in the right places. When she finished, I figured she would start publicly lashing out at me for wasting her class time the day before. I cringed as she walked toward my desk.

Boy, was I in for a surprise!

Instead of a rebuke, she smiled warmly, stared at me, and said with fervor, “Terry Powell, don’t you dare waste this gift! You are going to college, then you’ll earn at least a Master’s degree. Someday I’ll be reading things you publish.”

She slammed the door shut on my  misgivings about college, and on the belief that the baseball field would be my only avenue of accomplishment. As my senior year progressed, I’d stay up late the night before a paper was due in her class. I worked hard to choose just the right words. She was the first teacher who had believed in me, and I didn’t want to let her down. Though my motivation did not spread to other classes that year, I’d do anything for that lady.

She submitted one of my writing assignments to the local Lion’s Club, which sponsored a writing contest for high schoolers in our county. Later she exclaimed, “Terry, your allegory won first place!”

I thanked her, but wondered, “What in the world is an allegory?”

The Difference She Made

Don’t think I’m trying to impress you or to fuel my ego with the next few sentences. But I need to show the difference Mrs. Spratt made, and that requires use of contrast.

Before Mrs. Spratt: a 17-year-old who didn’t like school, and didn’t plan on more education.

After Mrs. Spratt:  two M. A. degrees at Wheaton College (one in Communications with an emphasis in journalism), and a PhD in Educational Ministry at Trinity Evangelical Divinity School in Illinois.

Before Mrs. Spratt: someone who daydreamed by writing poems on notebook paper, most of them winding up in a trash can.

After Mrs. Spratt: writer of over a dozen books, hundreds of magazine articles, and scores of Bible curriculum manuals for use in churches.

Before Mrs. Spratt: a melancholy, depression-prone kid who felt he had nothing to contribute unless he was standing on a pitcher’s mound.

After Mrs. Spratt: Director of Christian Education in two churches, and professor of Church Ministry for 38 years at Columbia International University (retired 7-1-2019). But still melancholy and prone to bouts of despondency!

For redemptive purposes, God delights in using weak, needy, unlikely people. Why? So whenever they bear fruit, He, not they, receives the credit. (1 Corinthians 1:26-29,  2 Corinthians 4:7, and 2 Corinthians 12:9-10 support this reassuring perspective.)

Often, God employs the method of incarnation to change someone’s life: fleshing out His love for, and encouragement of, needy individuals through another person whom He brings into their lives.

Enter Mrs. Spratt. A Christian lady working in a public school, an instrument in the hands of a powerful God.

How grateful I am for God’s grace, and how He expressed it through Mrs. Spratt. What a privilege I enjoyed to visit her at her home after she retired, and to give her a copy of my first book. “If God had not used you,” I told her, “this book, and any ministry it has, would not exist.”

If God employed a teacher to change your life for the better, and if he or she still lives, let this teacher know precisely what was said or done to impact you. Visit the teacher, use your phone, or write a hand-written letter. Hand-written letters pack  more emotional wallop than a typed note, or an email.  But don’t put it off. (After all, no one can smell the flowers on his coffin.)

If you are a teacher of children or teens–whether the context is a public or private school–never underestimate what God can accomplish through you. You may be the axis on which a young life turns.

Except don’t just notice the “A” students who are highly-motivated and who appear to be emotionally stable. Don’t just sidle up to the ones who pay you compliments. Look for the introvert, the daydreamer, the “C” student whose self-image needs boosting, the one who doesn’t believe that God implanted any special skill or potential within him. Ask God to help you say or do something to catapult him or her into a better future.

It may only take five minutes.

Sometimes, a teacher’s work with learners is like panning for gold. Yes, you see lots of dirt. But you aren’t looking for the dirt.