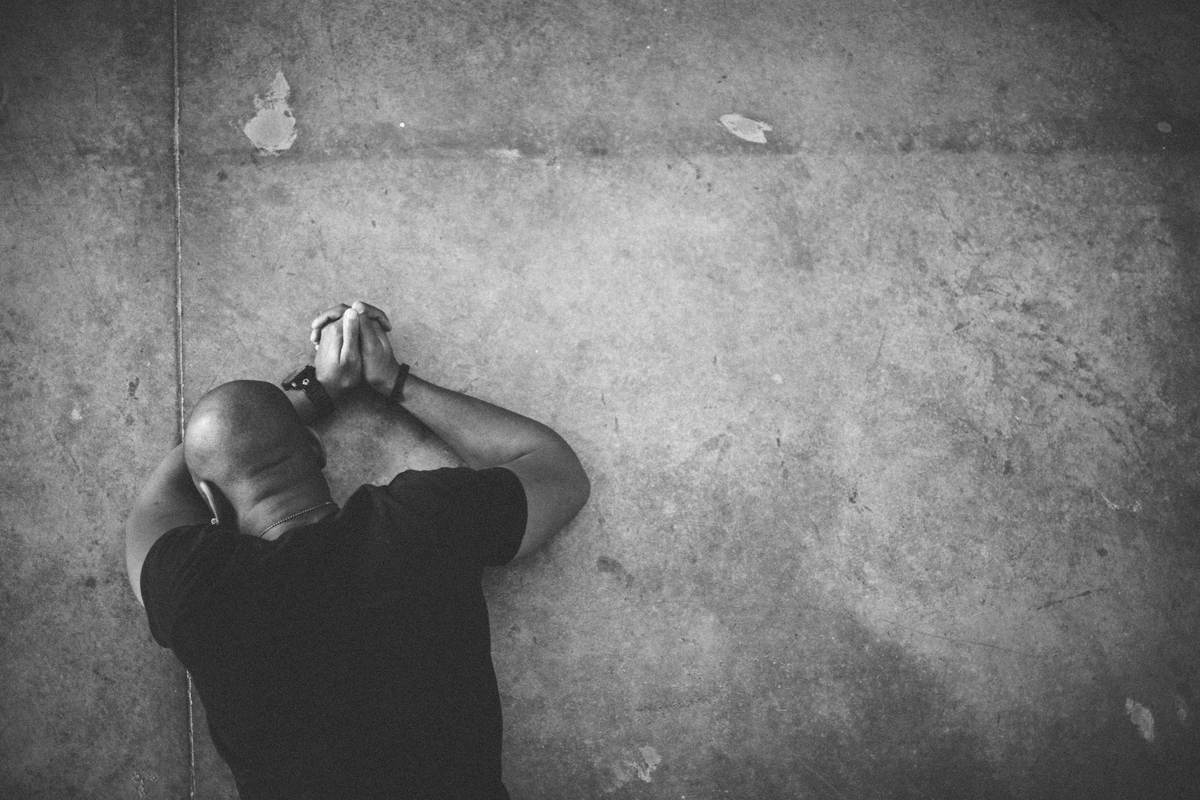 Another Weapon in the Battle Against Discouragement or Despondency

What is the most honest, transparent prayer you’ve ever uttered (or screamed)?

One that immediately comes to my mind occurred in June, 2003.  I sat in a recliner, alone at home, gripping the second handful of tear-soaked tissue.  My inside ache and bleak spirit contrasted with the sunny day outside. Depression had me in a vise-grip that had lasted for months. Sometimes when depressed I’m robotic and can’t feel a thing.  But this time, my heart literally ached. I wept so hard that day that my body heaved and convulsed. That’s when I screamed, “God, don’t You care!? I’ve taken meds and I’ve prayed and I’ve tried counseling but the pain still won’t let up. Why don’t You do something? I can’t take this despair any longer!”

That depressive episode continued off and on through the summer, but I obviously survived it, and during those long months God still gave fruit in my varied ministries. Perhaps my honest praying was one means of sustenance during those months when I vacillated between normalcy and despondency, because the communication with God, even when tainted by complaint, kept me more intimate with and dependent on Him.

Though my honest venting to God didn’t give total relief that day, I learned a long time ago that honest praying is a vital weapon in the war against bitterness, discouragement, doubt, worry, or chronic depression. We need to tell God how we really feel, not masking what’s going on in our hearts.  We don’t pray what we think He wants to hear, because His omniscience means He already knows the negative thoughts, attitudes, and emotions that control us (Psalm 139:1-6).

A Word of Qualification

When I discuss the necessity of honest venting, or transparency, before God, I am not advocating a disrespectful attitude toward Him.  There is a fine but important line of demarcation between being open with Him, and shaking our fist in His face, bitterly assailing Him for what’s happening to us.

Neither does being honest with Him  mean we accept negative attitudes such as complaining or anger as appropriate responses.  But opening up our inner states is a necessary step toward transforming them through reliance on God’s Spirit. I often pray something like this:

Father, I know cognitively that You are good, wise, and sovereign, that You can be trusted even during affliction.  But right now,  what I intellectually accept about You is not what I feel. You don’t seem to care one whit about my pain.  I know it’s wrong, but I feel anger toward You because I’ve pleaded so long without relief.  Father, I  admit to You where I am inside, but I don’t want to stay where I am.  Forgive me for these negative attitudes and for my wrong view of You, and cleanse my heart as needed. Use what I’m upset about for a redemptive purpose. Use the pain for my good or others’ good before You remove it.

Can you identify with verses 1-2?  “How long, O Lord?  Will You forget me forever?  How long will You hide Your face from me? How long shall I take counsel in my soul, having sorrow in my heart all the day?”

In verse 3 David pleaded with God for an answer.  What impresses me most, though, are the last two verses in this short Psalm. Before the Lord intervened and changed anything in David’s circumstances, David shifted his focus to God’s character and past faithfulness: “But I have trusted in Your lovingkindness; my heart shall rejoice in Your salvation.  I will sing to the Lord, because He has dealt bountifully with me.”

Whereas he admitted he didn’t like what was happening and questioned God’s goodness (vs. 1-2), he  shifted to memories of God’s past faithfulness, seeing evidence of God’s care and provision.  What a contrast in attitude between verse 1 and verse 6:  from complaining to trust!

Here’s the clincher: I believe David had to vent his antagonistic attitude before God could transform it. I cannot prove it, but I don’t believe the positive slant of verses 5-6 would have been in this Psalm without starting with the  negative content of verses 1-2.  God will not heal what we try to hide from Him. And God didn’t blast David for his blunt prayer, because later the Bible called David “a man after God’s own heart.”  There’s a huge difference between taking our hard questions to God, and complaining about Him to others in our sphere of influence.

Despite the gut-wrenching loss of family members and fortune, we typically associate Job with maintaining his rock-ribbed faith in God.  Here’s evidence that he did, indeed, keep his faith in God:

To his angry wife, Job said, “Shall we indeed accept good from God and not accept adversity?” 2:10)  Then the verse adds, “In all this Job did not sin with his lips.”

According to chapter 19, verses 26-27, Job asserted, “I know that my Redeemer lives….Even after my skin is flayed, yet without my flesh I will see God, whom I myself will behold.”

Yet Job’s emotions and attitudes actually vacillated between trust and despair.  A few of his remarks seem incongruous with the affirmations of faith I cited:  “Let the day perish on which I was to be born, and the night which said ‘a boy is conceived'” (3:3).   “Why did I not die at birth, come forth from the womb, and expire?” (3:11).

I’m not saluting Job’s negative cries nor His view of God they embody, yet his honesty demonstrated that faith in the Lord sometimes coexists with doubts and hard questions. Perhaps his transparency before God was just as important to his moving past the immobilizing pain as were the affirmations of  belief. His pendulum swings from positive to rancorous attitudes were ensconced in an ongoing conversation with God.  His inconsistency revealed Job’s humanity.  The negative venting didn’t move Job farther away from God, but ironically demonstrated that he believed there was a God to whom he could pour out his pain.

Job’s communication with God led to a disclosure from God that Job sorely needed in order to heal the throb of his raw pain. God never told Job why the tragedies occurred, but He revealed more about Himself as their conversation progressed.  He shifted Job’s focus from his affliction to a God who can be trusted even when the meaning of the suffering is elusive.

God didn’t populate Job’s home with new children nor restore his fortune until He revamped Job’s view of Himself.

Jeremiah prophesied in Judah prior to the nation’s deportation to Babylonia. He observed the moral erosion of God’s people and saw the debilitating consequences of God’s discipline. But folks didn’t heed his call for repentance, conveyed over a forty-year period. Their apathy wasn’t Jeremiah’s only problem. Opposition included threats on his life, a stint of imprisonment, and being lowered into a cistern, where enemies intended for him to die.

Though his affliction wasn’t as painful as Job’s, Jeremiah 20 reveals a similar vacillation between trust in God, and complaints against Him.

“O Lord, You have deceived me and I was deceived; You have overcome me and prevailed. I have become a laughing stock all day long” (20:7).  “For me the word of the Lord has resulted in reproach and derision all day long” (20:8).  Yet a few verses later he shifts to a stout proclamation of faith:  “But the Lord is with me like a dread champion; my persecutors will stumble and not prevail” (20:11).  “Sing to the Lord, praise the Lord!  For He has delivered the soul of the needy one from the hand of evildoers” (20:13).

What surprises the reader comes in verse 14-18.  Jeremiah reverts once again to self-pity and cries, “Cursed be the day when I was born….Why did I ever come forth from the womb to look on trouble and sorrow, so that my days have been spent in shame?”

Let me reiterate that I’m not commending Jeremiah’s rancor, just showing the realism of back-and-forth attitudes when it comes to thoughts about God and painful circumstances.  But like David and Job, he voiced his emotions to the Lord, and the very act of transparent disclosure kept him tied to God through the struggles of his ministry.  Once again, I believe the honest cries were integral to the resiliency of his faith and to a deeper walk with God.  He would rather we reveal even repugnant thoughts than suppress them, pretending we are on top of things when inside we’re frustrated and seething.

Ironically, even the disgusting things we voice to Him reveal faith in God.  Why else would we communicate these things to Him?

Don’t cross the line into disrespect and open rebellion against God. But do pray honestly, and if necessary, ask God to remove or transform the erroneous or inappropriate attitudes that you are disclosing. Plead for deeper faith in Him, especially when you don’t seem to have it. “Pour out your heart before Him; God is a refuge for us” (Psalm 62:8).

Which of the biblical examples resonates most with you?  Why?

In what ways do your prayers need to be more transparent and honest?

What is something negative you feel–toward another person or toward God–that you haven’t admitted to Him, because you’re afraid He won’t accept you if you’re honest?  How does this fear reveal a defective view of your justification? Take time today to speak with God about the negative attitude or emotions.