Are You Putting Too Much Faith in Your Faith?

by Terry_Powell | Jan 10, 2023 | Christian Living in the Trenches, Depression and Faith 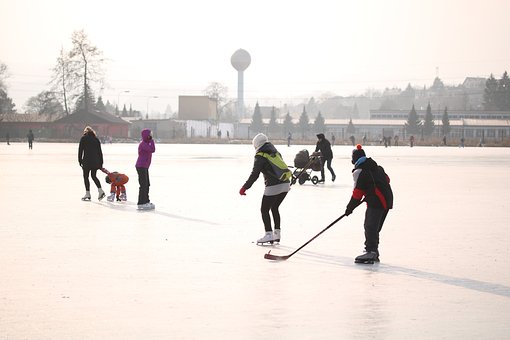 He knew the ice!

Allow me to back up and describe the context for that remark.

A church asked me to speak at  a winter retreat for the youth group, held at a camp in northern Wisconsin. As my wife and I arrived, I thought we were entering the polar region. Never had I seen snow so deep nor felt temperatures so cold.

Leaders set aside the afternoon of the first full day for recreation. I watched as teens and their adult sponsors grabbed sleds and large inner tubes to slide down a steep hill, ending up thirty yards out on the surface of a frozen lake. Their guffaws and squeals revealed their delight with the ride. I wanted to join them, but I didn’t like the idea of ending up out on the lake. I thought I’d  crack through the ice and drown. I couldn’t figure out how they could act so lackadaisically about the danger.

Instead of sledding, I walked to the edge of the frozen lake and, with fear and trepidation, gingerly tapped on the ice with one foot. But stifling fear kept me from placing both feet on the ice. I told myself that it must be safe to walk on or the youth leaders wouldn’t allow their kids to do it. I just  couldn’t conjure up enough faith to go out on the ice. Where I grew up in the Piedmont region of North Carolina, you didn’t walk on ponds or lakes in the winter. Even when an extraordinary cold spell formed a layer of ice, nobody walked on the water! At least, not without falling through.

I witnessed what I considered an unbelievable occurrence: a  man roared swiftly from one end of the lake to the other, driving a large pickup, no less! Safely, without cracking the ice.

Yet I still couldn’t wrap my mind around the fact that getting on the ice was safe. “How foolish can you get?” I exclaimed loudly. “Cold as it is, he’d never get out of the frigid water in time if he breaks through it!” The camp director heard my befuddlement, sidled up close to me and said, “That man has lived nearby all his life. He knows when it’s safe and when it isn’t. He knows the ice!”  Later, I discovered that the ice on that lake was 15-18 inches thick.

That incident reminds me of an encouraging insight about the faith that’s needed for daily Christian living: the object of our faith is far more important than the amount of our faith!

Object of Faith Versus Amount of Faith

My faith in the ice was so fragile during the retreat that I never took a sled or inner tube down the hill, not even after I saw the truck racing across the ice. The ice was more than capable of bearing my weight, but I didn’t know the ice well. I had no history of experiencing the strength of that ice. My lack of trust in the object of my faith robbed me of a good time!

Conversely, imagine this scenario. What if the truck driver who drove so confidently over the lake in northern Wisconsin took his first-ever trip to my hometown in North Carolina in January and discovered a frozen pond. He concluded that the ice had never failed him back home, so he figured the ice in my hometown pond would also hold the weight of his truck. But if he chose to drive onto the ice, he’d be tragically mistaken! He would have exercised gobs of faith, but it would have been misplaced. He didn’t know the ice in North Carolina.

More important than the amount of faith put in the ice was the strength of the ice.

A Little Goes A Long Way

I’m using the term “faith” in the sense of trust: the capacity to rely on the Lord and His enablement when facing the inevitable challenges of daily life as a Christ-follower. I’m not discounting the importance of and the necessity to grow in the amount of trust I put in the Lord. I’m familiar with Jesus’ emphasis on faith, as well as the insistence in Hebrews 11:6 that without faith it’s impossible to please God.

Yet I’m also aware that Jesus claimed that the humanly impossible could happen if we only have the faith of a mustard seed (Matthew 17:20). I also recall the burdened father who brought his son to Jesus, seeking healing from an unclean spirit. Initially, Jesus rebuked the dad for saying “If you can do anything, take pity and help us!” (Mark 9:22, emphasis mine). Next, after Jesus declared,  “All things are possible to him who believes,” the beleaguered but honest father replied, “I do believe; help my unbelief!” (Mark 9:23-24, emphasis mine).

Despite the dad’s unsteady faith, Jesus exorcised the unclean spirit. A little faith on the dad’s part went a long way!

Oh, how I identify with that dad! He exercised enough faith to intercede for his son before Jesus, but not enough to allay all doubts. Who He believed in proved more vital than how much faith he had.

Oh, Lord, I don’t trust You enough to feel great peace and acceptance in the midst of a deep depressive episode, to believe that You’ve given me this thorn in the flesh and that You’ll redeem the pain. So I often complain to You and rail against dark moods. But I do possess just enough faith during those times to review promises in Your Word and to cry out for Your sustaining grace to carry me through it!

Holy Spirit, sometimes a temptation to sin is so strong I think that yielding to it is inevitable. But when I start doubting my ability to resist, at least I have just enough faith to claim Your promise in 2 Thessalonians 3:3: “But the Lord is faithful, and He will strengthen and protect you from the evil one.”  I pray the verse back to You and You enable me to say no.

Jesus, sometimes I don’t have enough trust to believe that intimacy with You will satisfy me more than sin, so I choose to disobey You. Then I find out the hard way that sin doesn’t deliver what it promises. But then I do exercise enough faith to run to You with a heartfelt confession, believing that Your death paid for it and that I’m forgiven, accepted because of  Your righteousness that the Father sees when He looks my way (2 Corinthians 5:21).

Heavenly Father, how many hundreds (thousands?) of times have I run to You and cried, “I don’t have much faith today, but what little I have, I place in You, a worthy, sufficient object of trust!”

Oh Lord, I do believe, but help my unbelief!

Please, Lord, enable me to always put my faith in You and not get discouraged because I put faith in my faith. And prompt me to spend more time with You, so I get to know You better. Then, perhaps, the size of my faith will increase.

Aw, shucks. If I’d only known the ice in Wisconsin, I’d have enjoyed that retreat a whole lot more.

How well do you know the ice?