Do You Listen With Your Heart?

by Terry_Powell | Nov 17, 2022 | Christian Living in the Trenches, Depression and Faith In 2013, as I wrote the first draft of the final chapter of a book titled Serve Strong: Biblical Encouragement to Sustain God’s Servants, despair overwhelmed me. That week, a severe depressive episode enveloped me. My soul ached, and I couldn’t identify an objective reason for the pain. As I wrote the first draft, using a pencil on a pad, tears kept dropping onto the paper, making it unusable. Ironically, I had titled that chapter “Don’t Lose Heart,” based on material in 2 Corinthians 4.

I phoned Howard. He answered while on a walking errand on Main Street in the heart of downtown Columbia, South Carolina. I told him how despondent I felt, how unqualified I was to write a chapter titled “Don’t Lose Heart.” I had no heart left for completing the book, or for living, for that matter. For five minutes I vented to him and tried to depict through words the inner turmoil and angst.

As I poured out my heart to him (what little was left of it), Howard never interrupted me. He didn’t assure me that I’d feel better the next day, that the hopelessness was temporary. He didn’t tell me to exercise more faith. He didn’t cite a Bible verse that he deemed appropriate, for he knew I would probably already know the verse. He didn’t ask if I had been consistent with my quiet time.

When he realized that I had exhausted what I needed to say, he began wailing, crying aloud, while standing on a busy sidewalk during the lunch hour. Honestly, I thought something tragic had happened near him, such as a pedestrian being struck by a car. I raised my voice and asked, “Howard, what’s wrong? What happened? Why are you crying? Did somebody get hurt?”

After a half-minute of sniffling, he gained a modicum of control and said, through a tremulous voice, “I’m so sorry you hurt! I wish I could take some of that pain so you’d get relief.” Then, while folks walked around him on the sidewalk, he prayed for me, for the Lord’s sustaining grace, for the capacity to  complete that final chapter. (Later that day, I did complete it, the book chapter that several readers later said encouraged them the most.)

Do you have a Howard?  Are you a Howard for someone else who needs to talk?

The Ministry of Listening

Do you have someone who listens before he speaks, who doesn’t interrupt? Someone who knows that a hurting person needs to “hear” his silence and focused attention before his spoken words can be absorbed? Someone who doesn’t offer superficial solutions for a complex problem? Who isn’t judgmental? Who doesn’t fidget, impatiently waiting for the slightest opening so she can deliver a word of wisdom? Someone who listens with her heart, not just with her ears?

Of course, heart listening should characterize all of our conversations, not just those times when someone is discouraged or hurting. It is a way in which love shows. This kind of listening doesn’t treat another person like he or she is just a comma.

During a chat with his youth pastor, a teenager described how he felt when he tried to talk to his dad.

“You know what I am?” said the teen. “I’m a comma. I’ll be talking to my dad and he’ll say something. Then when I start to talk, he pauses. He doesn’t interrupt, but when I’m through he starts up again right where he left off. What I say doesn’t really mean anything. I’m just a comma in his monolog.”

How sobering it is to realize that even if we never interrupt someone, we still may not listen well. The father heard with his ears as his son talked, but he didn’t listen with his mind or his heart. He didn’t react to anything his son said.

Listening is more than a noble social skill. It’s a way of assigning worth to another person, of dignifying him or her.

Twenty years ago, I  wrote the following poem to a friend who listened well. I never felt like a comma in her presence.

Listening with Your Heart

While I am conversing,
most folks are rehearsing
what they plan to convey.
They don’t hear what I say.

They squirm quite a bit
as they stand or sit.
Or flash wordless information
that their thoughts are on vacation.
Or their eyes indicate
that they are running late.

Yet when I’m talking with you,
I get a different view.
I can see from your expression
that my words are your obsession.
Yes, you practice the fine art
of listening with your heart.

Oh, wouldn’t it be grand
if everybody would
seek first to understand,
then to be understood.

When we listen with our hearts, we’re conscious of what a person conveys through all three modes of communication: actual words, tone of voice and nonverbal signals. Experts on communication theory insist that how a person says something packs much more of a wallop that what he or she says. As noted in the following image, 7% of a person’s actual message is conveyed through words, 38% through tone of voice and 55% through the body’s nonverbal signals. 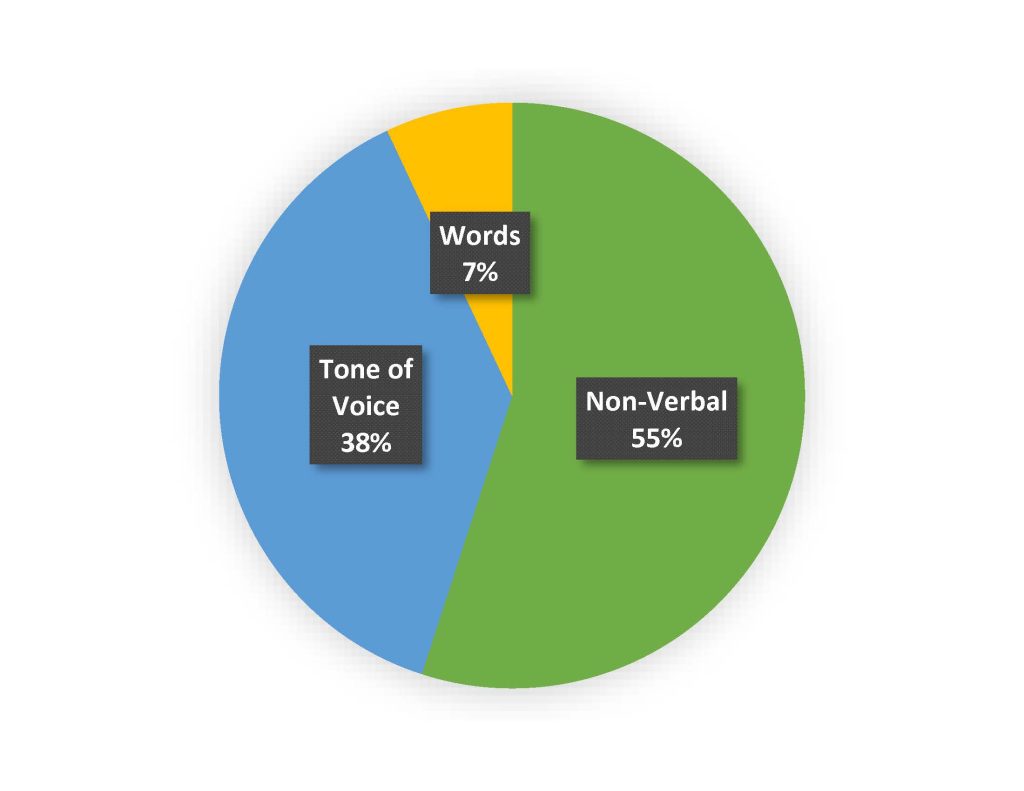 Imagine: the other person’s choice of words accounts for a small percentage of what he or she is actually saying to us! To listen well to all three modes of communication necessarily involves listening with our hearts. And heart listening requires eye contact, focused attention, nods that we are tracking with the person’s story, and a limited number of carefully-selected words that prompt the other person to say more, if needed.

Similarly, how the other person perceives our message during a conversation depends on what we communicate through all three modes: actual words, tone of voice and nonverbal signals. Does the other person see us listening with our body? With our eye contact and focused attention?  How does he perceive our tone of voice?

If this prayer resonates with you, make it your plea today.

Father, when Your Son met people as He moved about in Palestine, He listened well, even to those who interrupted Him. Create in me more Christlikeness in this regard. Give me a capacity for focused attention as people talk, to listen with my eye contact as well as with my ears. Enable me to hear not only each word they say to me but to grasp what they’re communicating nonverbally as well. In the name of the Savior, who heard what a person’s heart said, amen.

James 1:19 “This you know, my beloved brethren. But let everyone be quick to hear, slow to speak, and slow to anger.”

Proverbs 15:28 “The heart of the righteous ponders how to answer.”

Proverbs 18:13 “He who gives an answer before he hears, it is folly and shame to him.”

In her book Real Friends, Barbara Varenhorst explained how caring for others is a prerequisite to heart listening:

Heart listening can be learned, but it cannot be practiced or done mechanically. You can listen mechanically with your ears, but not with your heart. Why? Because the essence of listening with your heart is to put your whole self into trying to hear what the other person is saying, because you care that much. Unless you care, you won’t stop talking, resisting, or ignoring long enough to hear what is being said. You won’t sacrifice your time or convenience to hear the other person’s feelings behind the words or twisted behaviors. If you care enough, you will learn the necessary skills, and then you will practice repeatedly, putting out the effort needed to learn to “listen with your heart.”

In your sphere of influence, who most needs to receive from you the gift of listening with your heart?