NO WONDER SETH LOVED THE CROSS 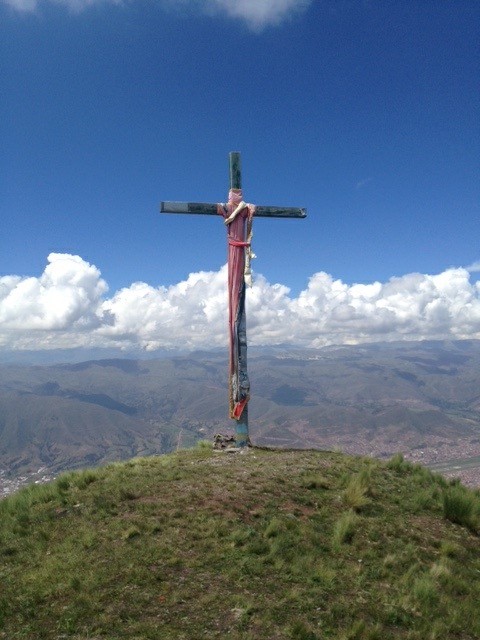 You know how it is when a particular lure is irresistible.

You keep thinking about it until your head throbs.

The longer you wait, the more your passion for it intensifies.

You cannot rest until you capitulate, and give in.

That’s what happened to Seth Thomas on June 23, 2017. He had to visit that mountain-top cross, and spend intimate time with the Lord there. This is his story.

This post honors the two-year anniversary of Seth’s home going. I told his story in a blog last year at this time, but this article is slightly revised. At the end, I’ve added a faith poem he wrote when he was thirteen years old, which shows his love for God’s creation, as well as his affection for the cross of Christ.

Seth Thomas, 24, a University of South Carolina medical student, died June 23, 2017, when he fell off a tall mountain in Peru.

Seth and a team of other students and two doctors were on a medical mission trip in the Andes mountains of Peru. Their purpose was to give poor women exams in an effort to detect cervical cancer early so surgery could save their lives. This area of the Andes has the highest rate of cervical cancer in the world.

Seth attended our local church in Columbia, South Carolina, and his parents still do. For 10 years, my wife taught Seth piano lessons. He was exceptionally gifted intellectually, and exhibited a soft heart toward God and toward people in need. In addition to his own examinations of patients in Peru, Seth, fluent in Spanish, consistently moved  from one examination station to another, interpreting words of the ladies for the other medical team members. Before his memorial service, I heard the team members talk highly of Seth’s love and character.

Friday afternoon, June 23, 2017, Seth took a three hour hike from the medical clinic up a mountain, to visit a large cross, erected on a small plateau at the top. He intended to spend time there, taking food, a blanket, and a flashlight. He knew he would have to return after dark. (Whenever he visited the mountains with his family, Seth loved to go alone to a secluded spot to pray and to worship God. He’d look for the highest vantage point near their camp site. If his parents couldn’t find him, they knew to look for the highest elevation nearby.)

Despite his experience as a climber, he apparently took a wrong step near the top of this 14,000 foot mountain and fell a long way to his death. Evidence suggests that he probably reached the top where the cross stood. Searchers found his body two days later, June 25, 2017.

The picture with this post shows the actual mountain-top cross Seth visited, near Cusco, Peru. Nearby residents, in honor of Seth, later put up a small memorial near the foot of this cross.

This was Seth’s second visit to the cross. He first came to the cross as a child, when he received Jesus as Savior.

The title of the message I gave at Seth’s memorial service was “No Wonder Seth Loved the Cross.” Hundreds came from outside our church, including many who were not Christian, because Seth was a young man easy to love. Winsomely, but boldly, I shared the gospel message that Seth loved.

I closed the message with the following poem, written as a gift to his parents. Seth himself wrote lots of poetry. Keep praying for Heyward and Janet Thomas, because the pain of losing a son lingers two years later, though they maintain deep faith in the Lord.

Oh, if the cross of Christ had the same spellbinding effect on us, as it had on Seth, how much more vibrant our faith would be.

WE DON’T KNOW WHY, WE ONLY KNOW WHO

Is the gospel Seth believed in a sham?

Where was his God, the Bible’s great “I Am!”

when Seth tumbled off a Peruvian hill,

leaving us to swallow a bitter pill?

of our God’s dark, painful providence.

Why take one so young? Whose faith so true?

We don’t know why. We only know Who.

He’s One who moved into our neighborhood.

that He was born to die, taking our place.

The cross: where God’s justice and love converged,

where our guilt and shame over sin is purged.

God knows our pain. He, too, suffered loss:

His nail-pierced Son upon Calvary’s cross.

God isn’t remote. He isn’t out of touch.

The cross shouts, “I love you this much!”

There Jesus accomplished “the death of death.”

Seth knew this when he took his last breath.

Seth’s life is not over. He is now complete.

He enjoys “Son-bathing” at His Savior’s feet.

Losing him hurts, but the parting is brief.

This life is short, but eternity is long.

The stakes are too high to get this wrong.

Yield to the cross for your heart’s deepest needs.

Heed its call to serve, wherever that leads.

No wonder Seth loved the cross: that is where

he found a love he was excited to share.

we do not know why, we only know Who.

During Seth’s memorial service, the University of South Carolina School of Medicine awarded him posthumously their 2017 “Community Service Award.”  Typically, this award goes to a graduate with years of experience in medicine. But one of Seth’s stated core values was “to serve others,” and the trip to Peru was not his first mission trip. The presenter of the award said that Seth embodied the highest values of the School of Medicine, and consistently demonstrated servant leadership.

Here is the poem Seth wrote when he was thirteen.

God Where He Is Seen

We see God everywhere, His love forever there.
Love great enough for everyone, every boy and girl.
From this redwood, we think of our Jesus,
about how we see Him in so many places.

We see God’s power in the mountains tall,
forested cathedrals of rock soaring high in the sky.
Wonderful towers scanning distant valleys and hills,
all handiwork of Jesus, Almighty on high.

We see God’s trust in the rainbow’s multicolored skein,
stretched across the sky like ribbon across a box.
From violet to red, from artic to equator, His message to all people,
His promise never to flood, everlasting covenant for all.

We see God’s love in the cross on the hill,
Wooden, tall, yet full of loving thought.
For 33 years, Jesus worked away from home,
Then pushed through crucifixion and Satan to give us salvation.

We see God’s heart in the sunset today,
valiant reds flowing with pink and orange in the sky.
Mo matter what day, what color, what year,
He sends His good nights to all from His beautiful heart.

“What dominated Jesus’ mind was not the living, but the giving, of His life.”
John Stott, The Cross of Christ