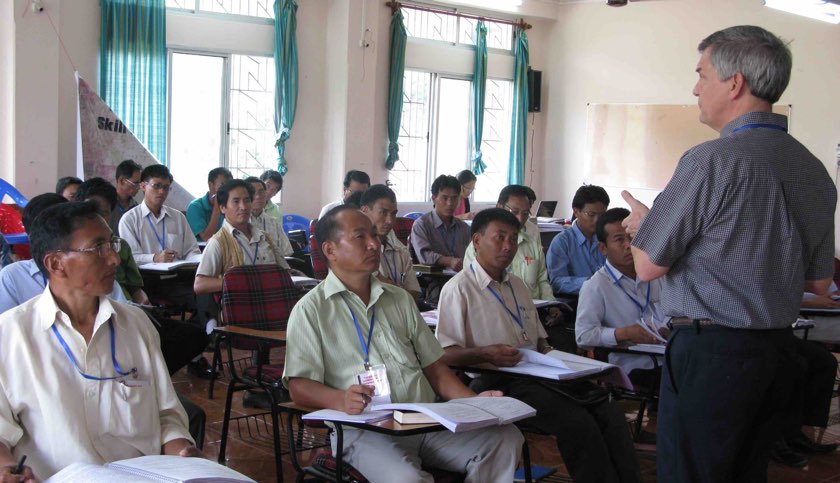 “But” is a conjunction with impact. It precedes a contrary opinion, or introduces a stark contrast to the first part of a sentence. The term qualifies, or completely negates, what precedes it.

*”I know I promised we’d get away this weekend, honey, but my boss expects this project on his desk Monday morning.”

*”We like your idea for evangelistic outreach, pastor, but we don’t have the money for it right now.”

*”It’s been raining four straight days, but the weatherman is calling for sunshine tomorrow.”

Years ago, a soul-nourishing Bible study for me was tracing the phrase “but God” or “but the Lord” through the Bible. In some cases, the name of the Lord doesn’t directly follow the term “but,” yet the verse clearly reveals a contrast that involves either God the Father or God the Son. Here are four verses that I find particularly helpful when I’m discouraged about ministry, whether the nemesis is a feeling of inadequacy, spiritual warfare, or an area of personal failure or temperamental weakness that leaves me feeling unqualified.

Whether you are a pastor, an associate church staff member, a missionary, a Sunday School teacher, or one who often shares his faith, may these verses feed your soul as they’ve nourished mine. I’ve italicized the key phrase in each verse.

1.  “Not that we are adequate in ourselves to consider anything as coming from ourselves, but our adequacy is from God, who also made us adequate as servants of a new covenant” (2 Corinthians 3:5-6).

Paul wrote these words in the context of a defense of his ministry, right after referring to the conversion of the Corinthians generated by his evangelism. They were the evidence of his authenticity as an apostle, but Paul knew he didn’t deserve credit for the fruitfulness he had cited.

If we’re honest, no matter how many compliments we receive, feelings of inadequacy still dog us, siphoning off motivation for duties involved in our service, such as preparation for teaching. All it takes is one critical note (usually unsigned), one reminder from Satan about a past sin, or the realization that a grown child is away from the Lord, to send us into a tailspin. God doesn’t promise that He’ll give us the same degree of popularity or eloquence as a pastor across town, or the same number of converts as a friend who often witnesses, or the same exuberant personality of a teacher across the hall on Sunday mornings. Yet if He has called us to our position, He does pledge His adequacy for our task. I firmly believe that God enables us for whatever He calls us to do.

Jesus personally interceded for Peter, knowing in advance the kind of temptation he would face, and how he would initially fail. And since His ascension, He keeps interceding for all of us who follow Him. His praying for Peter was merely a precursor of His ministry of intercession from heaven: “Christ Jesus is He who died, yes, rather who was raised, and who is at the right hand of God, who intercedes for us” (Romans 8:34).

To complement the Son of God’s prayers for us, God the Holy Spirit also intercedes for us: “The Spirit helps our weaknesses; for we do not know how to pray as we should, but the Spirit Himself intercedes for us with groanings too deep for words….He intercedes for the saints according to the will of God” (Romans 8:26-27).

Jesus words to Peter, “but I have prayed for you,” led me to the expansion of this concept in Romans 8. When the pressure of ministry causes you to falter; when it’s difficult for you to pray; when you are weary to the bone; when you doubt whether anyone is praying for you and your service, remember: two members of the Trinity represent you before the throne of God the Father. In my book, that’s two extremely influential prayer partners, toward whom God the Father will cup His ear.

3.  “But the Lord is faithful, and He will strengthen and protect you from the evil one” (2 Thessalonians 3:3).

Whether the temptation is in the realm of moral purity, false motivations for ministry, or bitterness toward a critic, Satan persists in his efforts to derail people, to keep them from teaching God’s Word, or from sharing their faith. When he succeeds, especially if the sin is a grievous and public one, Christ, whom he hates, has a tarnished reputation before the world.

When the enemy’s lure is so strong that yielding seems like a foregone conclusion, quote this verse back to God. Admit to Him your vulnerability to the sin, and plead with Him to fulfill this promise to strengthen and to protect you. Keep telling yourself that, because of this promise and the indwelling Holy Spirit, yielding to the temptation is not inevitable.

When we’re tempted, the greater sin is not the one we’re attracted to, but failing to call out to God for help. If we’re honest, sometimes we do not cry out to God and claim promises such as 2 Thessalonians 3:3 because we’d rather enjoy the fleeting pleasure of sin than gain victory over it.

Perhaps we’ve given in to a sin, not one serious enough to disqualify us from ministry, but one resulting in self-condemnation or a siphoning off of motivation. Or the failure isn’t moral at all, but  the ineffectiveness of a program we launched. Either way, we need a grasp of our identity in Christ, and a daily infusion of the Lord’s strength to keep going. If we do feel vulnerable to a particular sin–not necessarily one we’ve yielded to–we need to call upon the One whose grace not only pardons sin, but whose grace also supplies the power not to sin.

No verse in the Bible calls us to desperate dependence on God any more than Psalm 73:26!

In my book, Serve Strong: Biblical Encouragement To Sustain God’s Servants, I cover these verses and more in a chapter titled, “But God.” The book’s 24 chapters teem with truths and stories that instill resilience for ministry.

V. Raymond Edman, the President of Wheaton College in the middle of the 20th century, wrote a devotional book, But God (Zondervan, 1962). His work inspired my own study of this phrase in Scripture. Perhaps you can find a used copy online.