Christians Get Depressed Too 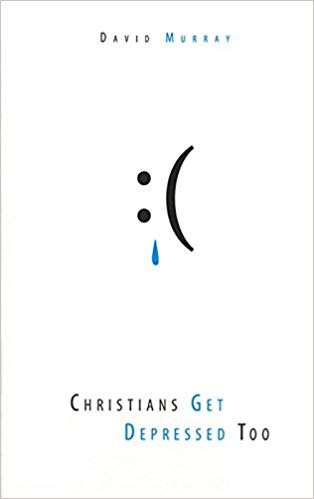 Concerning the relationship between Christian faith and depression, what misconceptions persist?

What are the primary symptoms, causes, and cures for depression?

In preventing or battling depression, what difference should faith in Christ make?

What Bible truths, passages, and characters speak to the issue of depression?

What extreme, unbalanced viewpoints are harmful when dealing with depression, or relating to victims of it?

For effectiveness as a caregiver, what attitudes and behaviors are essential?

These are among the questions David Murray addresses in his book, Christians Get Depressed Too (Reformation Heritage Books, 2010). Despite its release nine years ago, the book is pertinent today. Dr. Murray serves as Professor of Old Testament and Practical Theology at Puritan Reformed Theological Seminary in Grand Rapids, Michigan. For twelve years he pastored in the Scottish Highlands, which has one of the highest rates of depression in the Western world. There he dealt with many mature believers who nonetheless suffered deep depression, which spawned his interest and research on the subject. That experience prompts him to come to the defense of depressed Christians who are often harmed by misguided, unbiblical approaches to the dilemma.

Characteristics of the Book

*Clearly written, easy to understand, with a pastoral tone–not an academic or highly technical approach.

*Balanced. Murray emphasizes the authority and helpfulness of God’s Word, while still gleaning from other sources as long as they don’t contradict Scripture.

*Taps insights from other writers. In addition to examining biblical truths and texts pertinent to depression, Murray gleans from numerous authors who’ve written on depression. I especially appreciate the insights and quotes on despondency that he hoisted from giants of church history: Jonathan Edwards, Richard Baxter, and Charles Spurgeon, to name a few.

*Incisive analysis that cites the strengths and weaknesses of both the “Nouthetic Counseling Movement,” popularized decades ago by Jay Adams, and the modern “Biblical Counseling Movement.” The verb form of “nouthetic” is from the Greek and means to admonish, correct, or instruct. The emphasis is on using Scripture to confront wrong behavior that spawns the despondency.

He applauds Jay Adams for emphasizing our personal responsibility and the efficacy of Scripture in dealing with human problems. Yet he cannot agree with Adam’s assumption that behind almost every episode of depression is personal sin, nor with Adam’s position that medical or psychological  intervention is usually a wrong response. Here’s a quote by Murray that I hoisted from his chapter titled “Complexity”: “We would never take this view (sinful cause/spiritual solution) when counseling people with cancer, strokes, broken legs, diabetes, or Alzheimer’s. As Christians, our default position is that these physical problems are most likely the result of living in a fallen world. Why should our default position with brain problems be any different? Are we saying that the brain, the most complex organ in our body, is somehow exempt from the effects of the Fall? Why should we conclude that brain disorders are the result of personal sin?”

While Murray acknowledges that unconfessed sin can cause depression, he doesn’t see a person’s direct sin as the typical cause.

Quotes from the Book

Here are a few excerpts that resonated with me.

*”It is a dangerous and damaging misunderstanding that often leads people, especially Christians, to view medication as a rejection of God’s grace, rather than a provision of God and His grace.”

*”Though we may disagree that the depression is almost always caused by sin, we must accept that sometimes, even in depressions not caused by sinful conduct (e.g., as a result of thyroid malfunctions), people can adopt unhelpful attitudes and sinful behavior patterns, which should be sympathetically addressed and corrected.”

*“We must avoid making our own experience the norm for others.”

*”Perhaps the most obvious symptoms of depression are the depressed person’s unhelpful thought patterns, which tend to distort his view of reality in a false and negative way, adding to his depression and anxiety.” One example Murray cites is what he calls a false lens. “That is when we view our fears, errors, or mistakes through a magnifying glass and deduce catastrophic consequences.” For instance, “Despite having received forgiveness from God, you focus on your sins from the distant past in a way that leads to continued guilt, self-condemnation, and fear of punishment.”

*”David and other psalmists often found themselves deeply depressed for various reasons. They did not, however, apologize for what they were feeling, nor did they confess it as sin. It was a legitimate part of their relationship with God. They interacted with Him through the context of their depression….Psalm 77 is a perfect example of Asaph’s investigating and challenging his thoughts, with God’s help, in order to raise his mood and spirits.” (Murray devotes almost five pages to a breakdown and analysis of Psalm 77.)

*”Research has shown that mental health patients get better much quicker if they can confide in and get support from someone close to them.”

Role of the Bible in the Book

I (Terry) believe that persons who pit the sufficiency of Scripture against insights from psychology (the study of man) and medical intervention create a false dichotomy. God’s Word insists that creation “speaks” of God’s glory and “reveals knowledge” (Ps. 19:1-6). Insights about human behavior, the complex workings of the human body, and factors that affect mood are instances of God’s “common grace” for the benefit of mankind in general. Accepting help from sources outside the Bible–so long as God’s Word remains he ultimate authority–in no way compromises commitment to  and the efficacy of the Bible.

Repeatedly in his book, Dr. Murray shares how biblical truth is integral to the treatment of depression, including, but not limited to, his studies of biblical characters and aspects of our identity in Christ. Doctrines unveiling our identity in Christ are especially helpful in combating a depressed person’s false beliefs and negative, unbiblical self-talk. Ironically, Dr. Murray concludes, “In some areas we need to use our Bible as spectacles to read and learn from the knowledge God has distributed and deposited in the world. If we refuse to do this, if we say that we must separate ourselves from all knowledge outside the Bible, there is the risk of inadvertently undermining the sufficiency of Scripture.”

Pastors, Christian counselors, caregivers, and depressed persons who read Murray’s book will discover that it’s a small book with a big impact. If you google “David Murray and depression,” you’ll find video presentations and numerous articles he has written on depression. His book is an easy find on Amazon.