THE OUTRAGEOUSLY FRUITFUL MINISTRY OF A DEPRESSION-PRONE SPIRITUAL GIANT 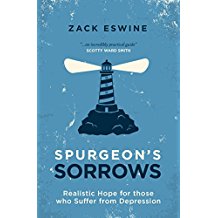 More than a century before satellites beamed Christian TV programs across the globe, Charles Spurgeon (1834–1892) was a renowned British pastor.  Due to the eloquence and depth of his preaching, contemporaries labeled him “the prince of expositors.”  While still in his early twenties he spoke to jam-packed sanctuaries. So many wanted to hear him preach that a few times, when he knew he’d be sharing the gospel message on Sunday evening, he asked congregants to stay home so unsaved visitors could get a seat.  Publishers still disseminate his sermons and books.

At first glance, you figure he’s the last person to feel inadequate or dependent.  Surely the strengths of this behemoth of church history far eclipsed his weaknesses.

Recurring depression dogged Spurgeon most of his life. During an episode when he was 24, he wrote, “My spirits were sunken so low that I could weep by the hour and yet I know not what I wept for.”  On another occasion he said, “Causeless depression cannot be reasoned with…as well fight with the mist as with this all-beclouding hopelessness.”

As he aged, painful attacks of gout also debilitated him, often keeping him from preaching and fulfilling other pastoral duties.

Though I gleaned the previous information and quotes from John Piper and Spurgeon’s own material, the purpose of this post is to introduce you to pastor Zack Eswine’s book, Spurgeon’s Sorrows, subtitled Realistic Hope for Those Who Suffer from Depression (2014, Christian Focus Publications).  All the quotes that follow are from Eswine’s book.  Though far from exhaustive, these conclusions and excerpts are ones that resonated most with me.

Please don’t make the mistake of thinking this book is only for Christian leaders.  Anyone who experiences depression or loves someone who does will profit from reading it.

Conclusions about depression I gleaned from Spurgeon’s story include, but aren’t limited to, these:

*Some people have a biological predilection for bouts of depression. Spurgeon was far ahead of his time in affirming this connection to the physical realm.  “Depression of spirit may stem from a real disease, it is not imaginary,” he asserted.  Biologically-based cases “require the business of the physician more than that of the pastor or theologian.”

Spurgeon elaborated:  “Some persons are constitutionally sad, marked by melancholy from the moment of birth…You may be without any real reason for grief, and yet may become among the most unhappy of men, because, for the time, your body has conquered the soul.”

*Depression isn’t necessarily an evidence of sin or weak faith. He believed that people are more prone to sin when despondent, and temptations intensify because of it, but insisted it is not sin.  “There are lines of weakness in the creature that even grace does not efface,” he insisted. Spurgeon believed that faith in Christ relieves depression, but doesn’t always cure it.  Depression is a misfortune, not a fault, and is not an indication of declining grace. Eswine concluded, “Our hope does not rest in our ability to preserve a good mood, but in Christ’s ability to bear us up.”

Concerning Satan’s role, Spurgeon did not think the devil causes depression, but he is like a lion, drawn to the weakest zebra in the herd:  “The great enemy makes a dead set at anxious souls…He delights in taking a person’s sorrows and making more of them.”

*Depression is a complex disorder that may stem from, as well as impact, three realms: circumstantial, biological, and spiritual.  Spurgeon decried superficial solutions, or a narrow approach to a remedy without considering the total person.  The following remark shows his grasp of its complexity: “There is a kind of mental darkness in which you are disturbed, worried, perplexed, and troubled but not about anything tangible.”  A cure isn’t easy because the cause may remain hidden.

*Christians who offer glib remedies for curing depression are usually ones who have not experienced it.  “We should feel more for the prisoner if we knew more about the prison,” he wrote.  He would agree that we tend to judge others according to our own circumstances rather than theirs:  “It’s a difficult thing for a man who has had a life of uninterrupted prosperity to sympathize with another whose path has been exceedingly rough….He who has been in the dark dungeon knows the way to the bread and water.”

*Knowing that Jesus suffered physically and emotionally serves as an impetus to call on Him when we’re hurting (Hebrews 2:17-18, 4:14-16).  Eswine summarized Spurgeon’s views on Jesus’ trials:  “To feel in our being that the God to whom we cry has Himself suffered as we do enables us to feel that we aren’t alone and God is not cruel.”

Spurgeon added, “Bodily pain itself should help us understand the cross, but mental depression should make us apt scholars of Gethsemane” (see Mark 14:32-42).  Before one of his sermons, Spurgeon readily admitted to his congregation that he felt exceedingly depressed.  Yet proceeding with his message sustained him.  Sharing the larger story of the gospel–the story of Jesus’ suffering and sympathy–strengthened him.

Eswine describes a number of ways in which Spurgeon responded to despondency and fought for his joy.

*A source Spurgeon consistently relied on for comfort was his Bible, which offers through metaphors and similes a “gracious language that God gives to the sufferer of sorrows.”  Words in Scripture that describe the diversity of a despondent person’s pain include “frail leaf,” “wounded spirit,” “bruised reed,” and “fainting soul.” Solomon employed the metaphors of going over the edge of a cliff and falling into an abyss.

Spurgeon especially appreciated Psalm 88, where the author compared his experience with being “in the depths of a pit,” “overwhelmed with all Your waves,”  “like the slain who lie in the grave,” just to list a few of the analogies.

Charles saw value in such language because it  fueled his prayers.  Similarly, we know how to talk to God about our pain because we can use the word pictures the Bible itself contains to describe our pain to Him.  He also believed that awareness of biblical descriptions of sorrow make us more sensitive to others who are broken-hearted.  In the words of Zack Eswine, without this language we’re prone to “offer mere band aids to the broken-boned, topical lotion for the internal bleeder.”

*Another biblical source of hope for Spurgeon was the promises of Scripture, rooted in the character of God.  A favorite verse of his was Psalm 91:4;  “He will cover you with His pinions, and under His wings you may seek refuge; His faithfulness is a shield and bulwark.”  He believed that God’s promises fuel realistic hope for sufferers.  He urged others to “become miners of promises within the caves of Scripture.”

He encouraged his congregants to write notes to themselves containing God’s promises, or to scribble a verse reference on a calendar date that was sure to evoke a painful memory. Charles kept in his pocket a small book cataloging Bible promises “so that he could appeal to it when pain of body or mind or anxiety began to do its foul disabling.”  According to Eswine, “Hope on the basis of promise swings open the curtains  and lets the sunshine in again…if only for a minute, an hour, a year, it is pleasant to see the sun.”

“I like in my time of trouble to find a promise,” said Spurgeon, “which exactly fits my need, and then to put my finger on it, and say, ‘Lord, this is Thy word; I beseech Thee to prove that it is so by carrying it out in my case.'”

*Time enjoying the beauty of nature and basking in the sunshine often relieved Spurgeon’s burdens.  What he called “communion with nature,” away from the fog, frost, and damp of London, eased his gloom and fatigue.

*He cut back on his workload, knowing that a depletion of energy made him more vulnerable to despondency. The longer he lived the more Spurgeon took furloughs from his preaching, and cut back on discretionary ministry opportunities.  Severe gout, which worsened as he aged, was a complementary reason for his cutting back.

During a major episode of depression, against his wishes he was compelled to take a three-month furlough.  He admitted that there was “no recovery but rest.”

*He looked for humor wherever he could find it, and laughed as much as possible. “Cheerfulness readily carries burdens which despondency dares not touch,” he wrote.  He collected humorous anecdotes for his own enjoyment and to use in his preaching.  In light of his frequent despondency, it seems ironic that a friend of his wrote, “He had the most fascinating gift of laughter…and the greatest ability for making all who heard him laugh with him.”

*Though medical intervention for depression was in its early stages, Spurgeon took advantage of it. We do not know if Charles took any of the actual anti-depressants available in his day, but to lift his mood,  he did admit to taking prescribed “stimulants and cordials.”

He didn’t advocate medicine alone for despondency; rather, he called for multiple treatment approaches.  But he wrote this concerning the use of medicine in general:  “It would not be wise to live by a supposed faith, and cast off the physician and his medicines, any more than to discharge the butcher, and the tailor, and expect to be fed and clothed by faith.”

“I often feel very grateful to God that I have undergone fearful depression.”  How could Spurgeon say that?  What benefits of suffering did he cite?

Eswine’s study of Spurgeon led him to conclude, “The presence of God with him proved more blessed than the absence of his pains.”  Spurgeon affirmed the goodness not of affliction itself, but of God’s redeeming work within it. The preacher acknowledged that his trials increased his estimation of Jesus, who became late in his life “fairer in my eyes than He was at first.”

*Exposure and Expulsion of Pride

“It is a good thing to be taken down a notch or two,” Spurgeon admitted.  “Sometimes we rise too high in our own estimation, that unless the Lord took away some of our joy, we should be utterly destroyed by pride.”

*Expansion of His Ministry

His own pain enabled him to “weep with those who weep” (Rom. 12:15). “Hundreds of time I’ve been able to give a helpful grip to brethren and sisters who have come into that same condition, which grip could never have been given if I had not known their deep despondency.”  Charles was able to comfort them “with the comfort with which we ourselves are comforted by God” (2 Cor. 1:4).

The best cap I can put on this book review is this statement by Spurgeon:  “Our God…will either make the burden lighter or the back stronger; He will diminish the need or increase the supply.”

Which insight from this review informs or encourages you most? Why?

What myths about depression and faith does Spurgeon’s story dispel?

In addition to obtaining a copy for yourself, ask the Lord for the name of a Christian leader who could benefit from Eswine’s book.  Then send him or her a copy along with a personal note of thanksgiving for his or her ministry. Tell this person that you’re praying for him or her to “keep on serving strong.”

For information about his blog and other books/ministries, check out Zack Eswine’s website: